Many networking and distributed computing experiments require servers and clients distributed across a wide-area environment. Typically, these experiments use the publicly accessible Internet to send network traffic between the different parts of the experiment.  Although the Internet is easy to use and adequate for many experiments, it does come with limitations. The shared nature of the Internet makes it difficult to control for congestion and security issues caused by factors outside of your experiment. Further, the Internet architecture requires the use of the IP protocol and most institutions use relatively slow firewalls to filter traffic that does not conform to TCP and UDP protocols using a set of secure port numbers. Often experiments need an isolated higher bandwidth networking environment where cross traffic can be controlled and arbitrary, sometimes custom, OSI layer 2 protocols can be used.

Chameleon's DirectStitch capabilities enable isolated direct OSI layer 2 connections between tenant networks and external facilities, including other Chameleon sites. Basic isolated tenant networks are private networks for connecting cloud nodes. Typically, each node on the private network can communicate with other nodes on the network and use a NAT router managed by the Chameleon's OpenStack system to communicate with the public Internet. 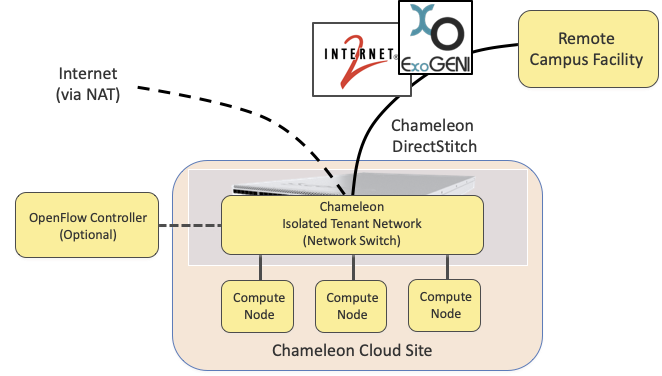 Many Chameleon users are familiar with the ‘sharedwan1’ network that spans both UC and TACC.  This network simplifies the deployment of high-bandwidth Chameleon experiments across both sites.  Using It is a simple as deploying nodes at each site connected to ‘sharedwan1’ instead of ‘sharednet1’ and using the local (‘fixed’) IP addresses.  Traffic between nodes should have lower latency, higher-bandwidth (10 Gbps/node, 100 Gbps aggregate), and less interference from Internet routers and traffic along the path between the sites.  However, this network is shared among all Chameleon users and is controlled by the Chameleon admin.

The most common use of DirectStitch is to create tenant controlled isolated networks distributed across Chameleon sites.  These networks have the same latency and bandwidth characteristics as ‘sharedwan1’ but are isolated not only from the Internet but from other Chameleon users as well.

The Chameleon team has simplified the deployment of these networks and have included Jupyter notebook tutorial for all Chameleon users accessible at: https://jupyter.chameleoncloud.org/hub/user-redirect/lab/tree/notebooks/tutorials/networking/Tutorial-DirectStitch.ipynb

Anyone interested in trying tenant controlled wide-area networking experiments is invited to try the tutorial.